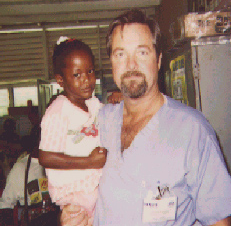 World Walk began because there is a vacuum in the world; a vacuum created by the large scale absence of medical care for most of the people on earth. Our humanity abhors this desperation for medical care experienced by some many human beings. After several years of participating in medical missions in countries like Peru, Venezuela, Mexico, Belize, Jamaica, China and Cambodia, it became clear to me that this problem is only worsening, with an ever-widening gap between those that have access to adequate medical care and those who do not.

In the face of such overwhelming despair, I found hope. It became obvious to me very early on that there was far too much disease in the world for individual caregivers or teams of them to make a difference on there own. At first glance, we did find that it appeared that there was not enough volunteer medical staff to begin to make a difference on a large scale in many areas around the world, particularly with the complications of such epidemic diseases as diabetes. However, that awareness of the inadequacy of traditional mission methods suggested to us that we begin to think “outside the box.” Over time, the people, the medical communities, non-governmental organizations (NGOs) and in many places, the governments themselves, supported our idea of “teaching the teachers,” in a given developing region or country.

Central to World Walk initiatives is the teaching of local physicians, nurses, physical therapists and administrators in both live and Internet settings. Rather than limiting the care which can be provided by a temporary visiting team of foreign doctors, nurses and physical therapists, it has been demonstrated that well-trained local health care providers can exponentially increase the number of patients seen. In addition, this solves the dilemma of how to assure adequate continuity of care when the visiting teams have left. The added ability to conduct real-time and archived education via the Internet provides World Walk with an extremely powerful teaching and support tool not available to other non-profits.

The “teaching the teachers” or “1003” model simply means that if one caregiver commits to training 100 caregivers during his profession career, and each one of those caregivers makes the same individual commitment, then by the third generation, there will be 1,000,000 trained caregiver as offspring of the original caregiver. Coupling this concept with training native caregivers in regional teaching and treatment “centers of excellence” in our partner countries, could ultimately deliver adequately trained personnel to the most rural regions of the developing world.

The “center of excellence” model includes out-patient and in-patient clinical facilities for patient care as well as classroom educational facilities for both local, visiting and remote educators, the remote educators using various forms of Internet education, including text, still photo and video material. Recorded (archived) material available through the Internet can then be accessible to students 24 hours per day, 365 days per year. In addition, the Internet capabilities can allow for a specialty consultation service, accessing specialists anywhere in the world.

The model’s flow pattern is initiated with an administrative site visit by World Walk staff in an area with an expressed interest in hosting a center. Included with an evaluation of patient load and hard assets (hospital availability, instrumentation, etc), individuals are identified who will serve as local, regional and national leaders for the program. The administrative visit identifies the regional leadership who will partner with World Walk and make a commitment to continue the development of the center even when World Walk staff is not on site. Steps two and three consist of providing computer linkage followed by patient screening sessions in anticipation of step four, a medical teaching mission to the area.

It is during the first mission that World Walk surgeons begin actual hands-on training for the local health care personnel who will ultimately be running the center. It is anticipated that at least two to three missions will be required at a site before it can become independent. However, not all missions will necessarily require World Walk surgeons, as those in nearby centers can also be involved in teaching. Once independent, local physician leadership will receive periodic ongoing education at the World Walk training centers in the United States, ongoing support via the Internet and visiting specialty training teams based on regional needs.

The exchange program, which includes multi-site training in the U.S. and other countries, will include participation in hospital rounds, surgery in the operating room, wound center patient care and hospital and medical school classroom lectures and conferences.

The Internet accessible “cybersite” can have many functions, including mission and exchange program planning, specialty consultations, as well as live and archived educational programming with continuing medical education credits (CME) available, provided by major U.S. medical schools. The cybersite can also contribute to research data gathering and for measuring outcomes for preventive and therapeutic initiatives as well as for communication between and among other mission sites as well as NGO and government programs.

It is important to emphasize that, with this model, each “center of excellence” can develop at its own pace and with a focus on the priority diseases of that region, whether it be diabetes, leprosy, ulcers, traumatic wounds or pediatric clubfoot and other congenital and neuromuscular deformities. In addition, the concepts of vertical and horizontal networking allows even more impact through leveraging collaboration with other local, regional and national missions who need the specialty treatment and care provided by World Walk staff. The concept of “portal sharing” described ultimately can allow any medical or social service organization to use the World Walk Internet portal to help assess and deliver their specialty to a particular watershed area, particularly in times of emergency, e.g., natural disasters.

The model’s long range design is to make World Walk physician team travel increasingly focused on providing hands-on training to surgeons with the greatest needs. As increasing numbers of competent local physicians receive training, it is anticipated that they will eventually become the driving force behind further teaching and the spread of centers to new areas without direct personnel assistance from World Walk. In fact, the regional leadership will create their own teaching teams. At that point, World Walk will evolve to become a resource available to these physicians and their centers, rather than a direct care provider, thereby fulfilling its long-range goal of creating regional self-sufficiency.

As time goes on, it has become more clear to us that we can make a difference if we first develop the trust of people we serve and then partner with their medical communities as equals in this “joint venture” for humanity. There is much work to do but together we can reverse the ravages of human suffering, wherever we find it. In a world burdened with a firestorm of pain, hunger, war and injustice, we hope to bring a “peaceful storm” of healing to those countless human beings who need it most. We can change the world and as long as there are people suffering in underserved regions of our planet, we should not rest.